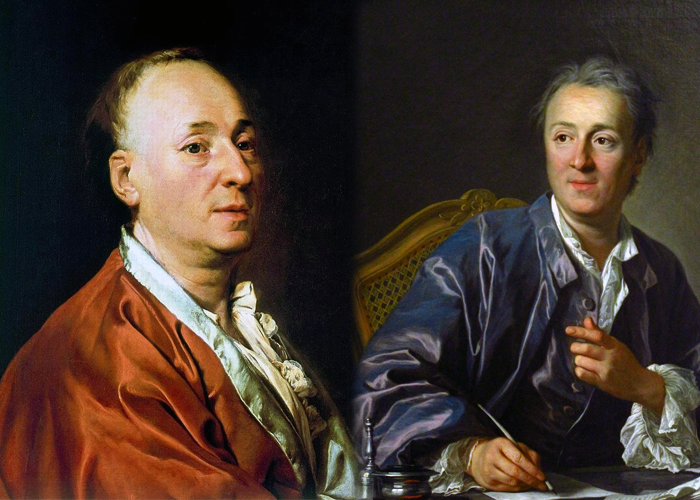 In mid-1700’s France, there lived an artist and writer on the brink of poverty.

His name was Denis Diderot.

He had been born into an established family, the son of a successful craftsman, and he had obliged the social standing of his birth by pursuing a formal education. He obtained a Master of Arts in philosophy, bound for a respectable profession in clergy or law.

But Diderot dreamed of becoming a writer.

When Diderot was 21 years old, he dropped out of school. His furious father disowned him, and Diderot lived a scrappy bohemian lifestyle for the next thirty years.

Yet he enjoyed this simple life. His robes were plain but comfortable. He furnished his sparse home with a tiny writing desk and a tattered straw chair. He spent his evenings at his battered desk, scrolling by candlelight.

He wrote novels and scientific papers and critiques of the French government, and article by article, book by book, his ideas began to spread. He wrote Encyclopédie, one of the most comprehensive encyclopedias of the era, and over the decades, despite his lack of disposable income, he amassed an impressive collection of books.

His ideas impressed the Russian Empress Catherine the Great. When she learned that Diderot needed financial help, she volunteered to serve as his benefactor.

In 1763, Catherine the Great purchased his personal library, paying an enormous sum for his collection. She requested that Diderot keep those books at his home, offering him a generous annual salary to act as the collection’s caretaker.

Then she ordered her staff to pay his salary for the next 50 years upfront.

That’s when his life turned sour.

Surely, Diderot reasoned, he ought to be permitted one small indulgence. What harm could there be in spending a sliver of his windfall?

And so Diderot bought himself a fine scarlet robe. He loved this robe, and referred to it as “my sumptuous scarlet.”

But his joy was to be short-lived.

One night as Diderot sat at his desk, he noticed the jarring disparity between his tasteful scarlet robe and his tattered straw chair.

He wrote that he saw “no more coordination, no more unity, no more beauty” between his scarlet robe and his usual surroundings. How could he sit in an ugly chair while wearing a beautiful robe? What if the straw tore the robe?

Diderot replaced it with an armchair upholstered in Moroccan leather.

Except his elegant chair looked out-of-place next to his tiny writing desk. He replaced it with a gleaming new wooden table.

His pile of paperwork couldn’t sit atop this beautiful wooden table. He bought a finely-crafted bureau with drawers.

He bought a new kitchen table, new artwork, a mirror to hang above his mantle. He bought a gold clock, an assortment of sketches, an antique bronze statue of Venus.

Piece by piece, Diderot replaced every item in his home, until he lived in splendor that reflected his scarlet robe.

But he had spent his windfall.

And so it was that Diderot came to rue the day when he purchased his fine scarlet robe.

“All that remains of my original mediocrity is a rug of selvage,” he wrote in an essay. “I can feel that this pitiful rug doesn’t go well with my newfound luxury. But I swore and I swear, like the peasant transferred from his hut to a palace … that Denis the philosopher will never walk upon a masterpiece …”

“When in the morning, covered in my sumptuous scarlet, I enter my office,” he wrote, “I lower my gaze and I see my old rug of selvage. It reminds me of my beginnings and pride is stopped at the entryway to my heart.”

Today, the Diderot Effect is a term that describes the tendency for purchases to trigger additional purchases.

But it doesn’t have to be this way.

We live better lives than Denis Diderot and his peers.

We sit in castles made comfortable by thermostats we control from our phones. We keep milk and meat in electric ice-boxes known as refrigerators. We access safe, clean drinking water from a tap that we turn on with a simple flick of the finger. We watch entertainment from private devices we control with tiny remotes. We live lives of luxury.

Yet we hunger for more.

We decide our refrigerator isn’t nice enough; not when the latest models are wifi-enabled with touch screens. We gripe that the pixels on our private entertainment-streaming devices aren’t sharp enough. We nitpick at the aesthetic of the tap from which our clean drinking water flows. “This faucets’ curve isn’t quite right, and I prefer stainless steel over chrome.” We walk on ceramic tile floors and grumble that it’s not hardwood.

We spend our windfall.

And then, in the midst of the madness, we take a step back.

We look around and realize that our castles have grown too large; our furniture and clothing, too fancy. We realize nobody goes to their deathbed regretting that they never had hardwood floors.

We realize that we are on-track to repeating the mistake of Diderot, surrounded by splendor with empty pockets. All flash, no cash.

But our situation is forgiving.

We can return the robe.

We can downsize into modest homes. We can find joy in home-cooked meals rather than extravagant restaurants. We can shop less and give away more.

And piece by piece, choice by choice, the Diderot Effect loosens its grip.

Diderot can return the robe.